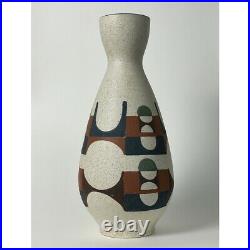 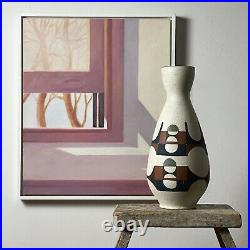 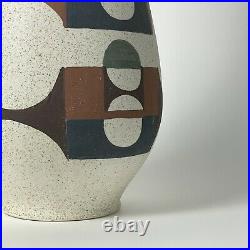 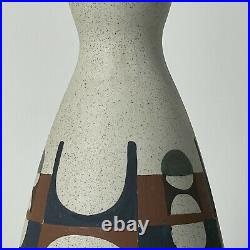 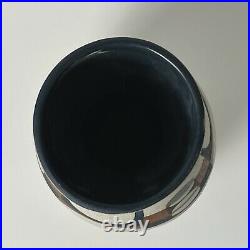 In good condition with some wear to the paint. Please refer to the pictures for details. Artist's signature below the hand painted company name on the bottom of the vase. Size: 16.75"H x 7"D. In 1949 the Art Department was established at Lapid.

Amongst the designers at Lapid over the years were Elspeth Cohen, Dr. Bertha Rosenthal, Ray Silverman & Dvora Gazit. The designers were primarily responsible for the forms and shapes, and the head decorator the designs - although often it was a joint collaboration. A group of 7-8 decorators would then hand paint the designs onto the art pottery, making for subtle variations between the same base designs, and each piece unique.

The earliest pieces I have seen from this pottery are around 1952, very glossy and nowhere near as sophisticated in design as work which soon followed once the pottery was more established, and began exporting. Up until very recently there was little published in reference to Lapid Pottery. For years the only reference I could find is a paragraph in the book "Art in Israel" by Benjamin Tammuz published in 1963 by Chilton Company. Elspeth Cohen, designer for the Lapid factory, has also been responsible for some of the best Israeli ceramics.

Her style is clean, austere and classical and in some ways reminiscent of contemporary Scandinavian design. It is unfortunate that Lapid is not equipped to produce large tableware, since her talent is admirable suited to this field. However, In the past 7 years or so, much more of the history of Lapid is being documented, for a book, thanks to Kobi Klaitman in Israel whos father worked at the Lapid factory. Lapid was certainly influenced by Scandinavian and West German pottery of the time, but at the same time there is nothing else quite like it because some of the colors and designs show strong local influence of the colors and archaeology of its' region. Nearly all of the Lapid Art Pottery (as opposed to their dinnerware and domestic ware) is hand painted with either oxides or glaze, with techniques like wax-resist and sgraffito often used as decoration.

This item is in the category "Pottery & Glass\Decorative Pottery & Glassware\Vases". The seller is "versacrumstudio" and is located in this country: US. This item can be shipped to United States.