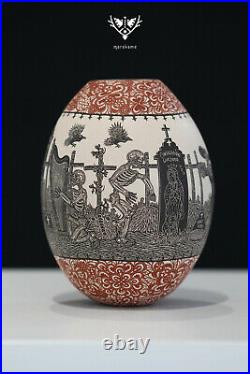 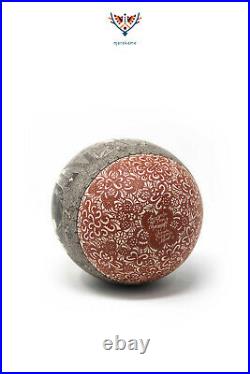 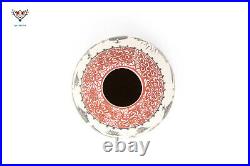 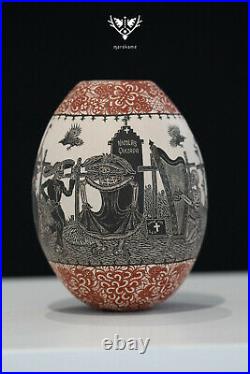 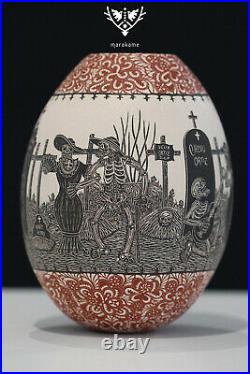 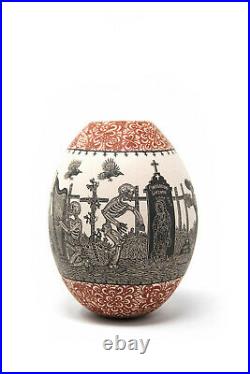 Every piece includes its certificate of authenticity. Every piece is unique and is signed by the author.

Juan Mata Ortiz is a town in the Mexican state of Chihuahua, located about 35 kilometers southwest of Casas Grandes, near the ruins of Paquime and Colonia Juarez. It is famous for the pottery produced in it. The population receives its name in honor of Juan Mata Ortiz, a Chihuahuan soldier who during the XIX century distinguished himself in the combat of the Apache tribes in the region, until he was killed in an ambush by these groups. It is located in a valley on the banks of the Casas Grandes River, at the foot of a hill known as "El Indio". One of the techniques they use is that of total reduction and smoothing, a low-temperature technique, or that of graphite, which is using it in two ways: as a majority part of a slip and applied in dry powder on the already burnished pieces.

In both cases, they let the pieces dry and then burnish them again. To make a pot, potters start by kneading a clay tortilla that they compress with their fingers into a shallow, plate-shaped plaster matrix. After cutting the excess from the edges, they make a thick strip of clay and join their ends to form a ring of the same circumference as that of the mold. They place this large annular'chorizo' on the edges of the mold and attach it to the tortilla around it; with your fingers press it up to form the walls.

Then they refine their shape and match the surface. The walls are thinned evenly by scraping the outer face with the teeth of a piece of saw, while pressing with the fingers from the inner face. When you touch a finished vessel, you can feel the artist's fingers that molded it inside. Is a brand that proposes a creative way to merge art, design and culture. We believe that we can converge this trilogy of concepts through our project of Diffusion and Commercialization of unique pieces of Art Wixarika (huichol). Our pieces are made by Huichol families from different rural communities that mainly live in the Sierra Madre Occidental of the state of Jalisco.

The central idea of this project is also to disseminate, commercialize and revalue pieces of Huichol art, traditionally considered as "crafts"; it is to show that the realization of a piece and its mythical symbology are intimately intricate with a social and cultural dimension little known to the world. We have works that are made using two basic techniques: beading and yarn painting. Which are carried out in an exhaustive period that goes from a week to months of work. We specialize in the projection and sale of collectibles and we take care together with the huichol artists of the impeccable manufacture of each piece.

The elements of the worldview of these artists are reflected in it, making them unique and unrepeatable artworks, as each artist has a particular way of expressing their feelings, colors, shapes and visions. From the elements that have been shaping for centuries for their spiritual importance, such as the blue deer, corn, the eagle and the "tuutu" (peyote) rose, all descendants of the Sun God "Tau"; to the emerging symbology of contemporary Huichol artists with a conceptual meaning, which has emerged from the Huichol culture and its magical traditions. This item is in the category "Collectibles\Cultures & Ethnicities\Latin American\Mexico\Pottery".

Delivered with certificate of auth.