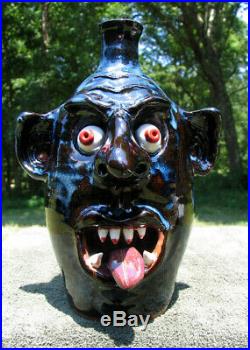 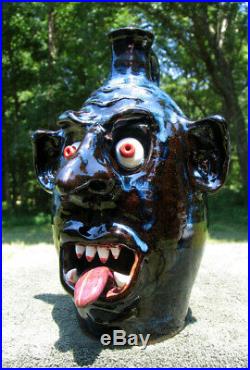 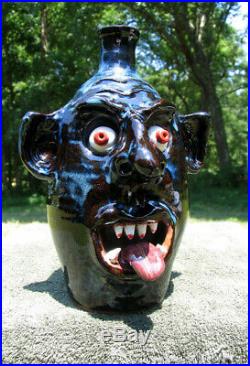 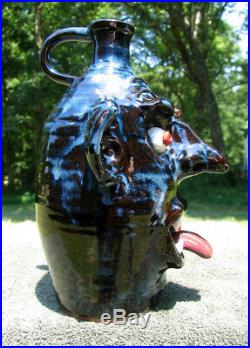 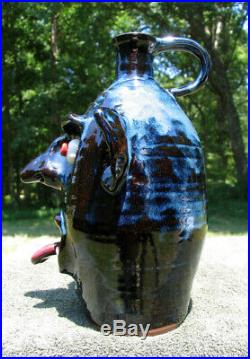 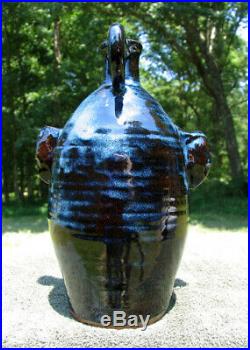 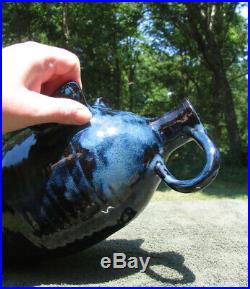 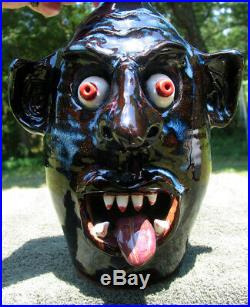 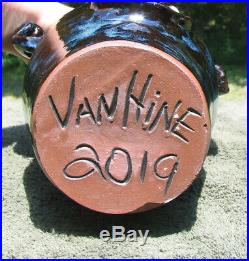 He vants to suck your blood... By The Redneck Potter, Van Hine. From the master of bats to a vampire who stutters... Who's a scary vamp - surely not this guy.

He's perfectly happy to sit on a shelf and watch over the humans around him. He's quite tame & rather bored by it all. Or is he just lulling you into a false sense of security. All the better to suck your BLAH blah, blood.

Anyways, why not adopt a creature of the night? Just remember not to put him in direct sunlight and don't feed him after midnight. With many people today focused on beauty and having everything looking just right, why not pay a little attention to those things in life that aren't so cute and cuddly?

So, let's forget perfect for a while. Let down your hair, kick back - and let's celebrate ugly! My ugly face jugs start their life as a shapeless lump of clay. After much poking, prodding, and smooshing - whoila!

An ugly face jug is born. Some are only mildly afflicted, others have serious cases of ugly. And a few are even fugly!

About the Artist: Not sure where to begin, so lets start in the middle. I have found my true passion in clay!

Took pottery classes back in college in 1999, but lacked a place to work. Then I moved to Tennessee and finally got a studio of my own. So I've been working on the potter's wheel since 2005. And I began making whisky face jugs in early 2007.

I first started offering my work at local craft shows in mid-2007. Most people find that my work swings the gamut from whimsical to downright creepy (depending on my mood) with many degrees in between. Hubby says I make whimsical and funny stuff three weeks out of the month and the other week I make evil.

This was obviously made during one of my happy weeks. Now, you have an opportunity to collect one of my works without having to go to the show! Every piece is thrown on the wheel, altered/sculpted by hand and then fired & glazed. My work is hand carved - NEVER MOLDED! No two are ever exactly alike - although they may seem similar - they are just part of a series of themed jugs.

Each face jug is signed on the bottom and comes with a certificate of authenticity. Don't forget to check out my Check out my other jugs. They are off the wall (just like me).

If you like my jugs, be sure to add me to your favorites list. So you can see new work as it's listed.

You can also search THE REDNECK POTTER on Face Book to see my creations as they are being made - before they are listed. I pack my items with plenty of bubble wrap and peanuts. The item "Blah Blah VAMPIRE UGLY FACE JUG folk art southern pottery ceramic nc evil" is in sale since Monday, July 29, 2019. This item is in the category "Pottery & Glass\Pottery & China\Art Pottery\Folk".